second post for today. This time I`d like to show off the actual progress with my Dark Eldar army for Epic Armageddon. As mentioned preciously the entire army is based on Games Workshop DE jetbike kits and Infantry as well as superb Taloi pain engines and Raiders from Onslaught Miniatures. By now most of the details become visible on the models. Hair, leather and sails still need to get painted and metal on Raiders, Ravagers and Infantry needs some proper washes before blue OSL gets applied. I am still waiting for my basing materials, which is not even shipped by now, so that one could take quite a while as well. Last weekend I also managed to get a second game in, which I am going to cover with another post later on. For now some pics and a Youtube vid, showing off most of the army and giving some information how the stuff was build. If you have any questions, please feel free to post them in the comments below.

Lets start with the entire army overview. By now the miniatures are worth around 3-4 thousand points. Even though less Barges of Pleasure and more Raiders might be advisable in game terms, I wanted to get as many points painted as I could, without finding myself lost in tons of miniatures. This is one of my main aims concerning painting motivation and every hobbyist with as many projects running as I have, will absolutely know why 😉

Shown above are three objectives, the large of which counts as warp portal. Additionally I got one of my Battlefleet Gothic Dark Eldar cruisers for orbital support. The latter is especially useful against opponents with strong armored war engines, as it theoretically allows you to place two large barrage templates and two pin point attacks in round one. If successful, this should make your life way easier an make your troops survive a little longer. 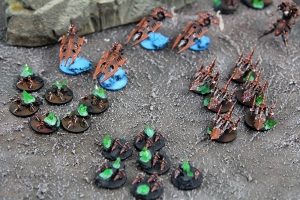 The very core of my army are three syndicates – one of which containing the archon. They get packed into the barges of pleasure, which are quite potent assault vehicles and whatever this combination assaults, is going to go away. As Dark Eldar can – just like their Craftworld counterparts – withdrawal their entire movement, the 45cm threat range is quite frightening. The four Shadowfields guarantee, that everything but focussed fire by enemy units won’t prevent the deadly assault.

I also got al large Ravager fleet painted. These are super powerful in firefight and ordinary ranged assaults, but pop up like corn in the microwave. If they get shot, they die. Usually I keep them in reserve and assault out of a portal, denying my opponent to shoot on them until it’s too late.

Four Taloi in a Slavebringer are also a feared assault unit. equipped with tough armor and Macro Weapon attack, this shock formation is capable to do serious harm. The Epic-UK list does not allow that combination and instead enables you to bring them out of a mobile portal – also a very fluffy option in my opinion. 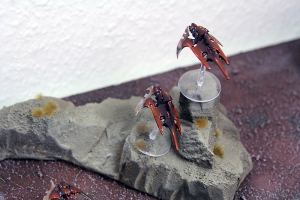 The airpower is obligatory for Dark Eldar, as the don’t have any artillery, nor ground based anti air – which means in game terms, you can hardly win without taking at leas one squadron of fighters with you. Long story short: I build two squadrons, just because they are fun to play and quite like the Eldar Nightwings – anything else to add?!

The Slavebringers are quite potent assault craft. Equipped with two shadow lances, DC 2 and a Shadowfield, they usually deliver their goods like FedEx – faster and easier 😉

The two Vessels of Pain are the backbone of my army. capable of delivering lance and TK weaponry, combined with decent armor (for Dark Eldar) and two Shadowfields, these war engines are highly mobile and a potent tool in my army.

The reaver jetbikes are average assault troops but almost the fastest troops in the entire game. With a movement speed of 40cm(!) these units can cross the entire board with one march action. Keeping in mind the fleet of foot rule, this allows you to support engagements literally anywhere on the board.

The Scourge fleet is a potent firefight support unit. I haven’t had the chance to try them out yet, but will definitely try, due to their lance weapons and shock ability. 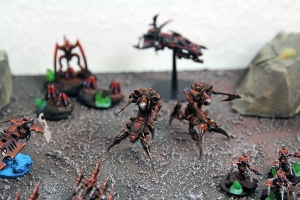 The Tormentor Titans are a unique thing to the Net-Armageddon list. Summed up, they are 500 points medium war engines equipped with jump packs, super fast and capable of dealing out some TK shots and quite harmful assaults. They are however quite expensive and even though 3K games would theoretically allow you to field two of them, the low activation count and the lack of any AA units seriously make that option a drawback of game deciding dimensions. Not recommendable but for sure fun in games where you know the opponent and where you can be sure to encounter no to just one formation of aircraft.

Once I will be done with this lot, there is just around four times as much waiting in the shelves to get painted… this project is going to last for quite a wile.

Hopefully I could encourage you to buy some of the awesome Onslaught miniatures and get a Dark Eldar army yourself.

as usual, if you need something quickly, nothing goes as it should. Last weekend I travelled to Berlin, intending to get some airbrush blue tones for my Stygian bases. However it turned out they were not in stock and I have to wait for another two weeks. That being said, I used yesterday evening to paint up a test model for the Ravenwing jetfighters, in order to test the paintscheme on a model without  any clothing parts and therefore without the light brownish colour. As usual you are welcome to share ideas about anything concerning the models here on my blog.

I also added a shot from my 40k pendants I once owned. And here we go: 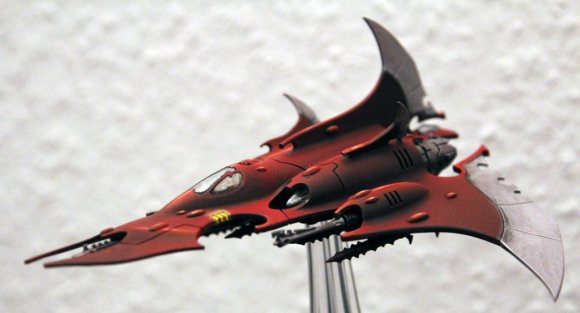 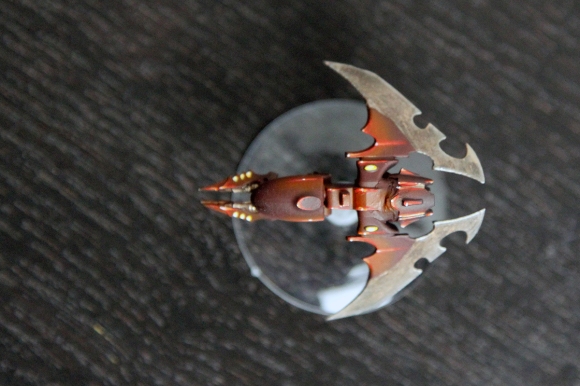 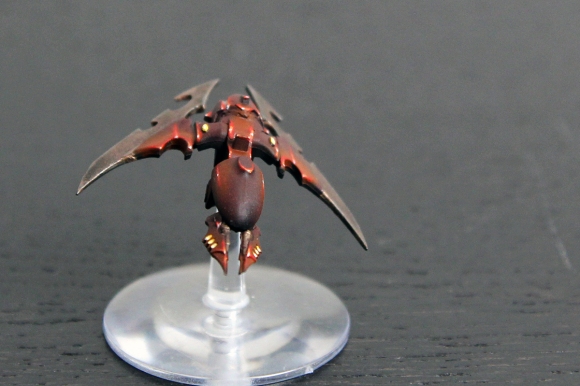 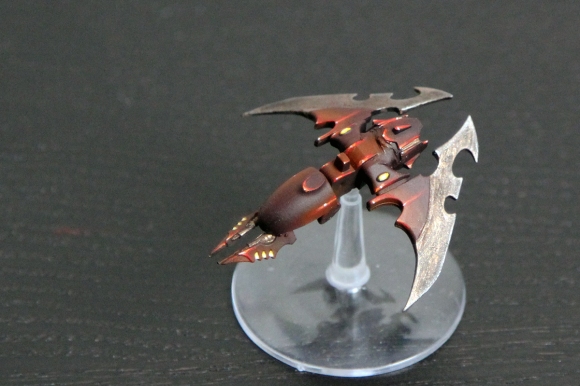 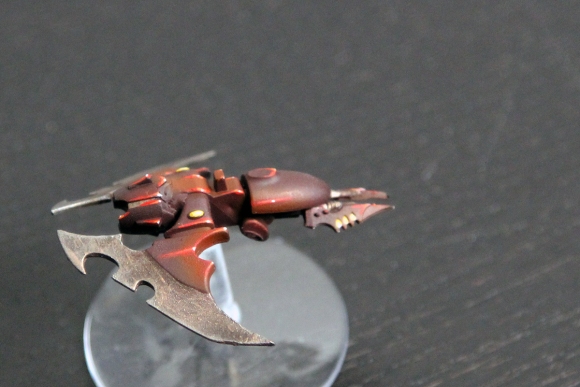